First come the disclaimers:  I am no expert on withdrawals, so all this information is second hand, from the nurses and doctors to me, from me to you.  All babies withdraw differently, so a baby can be on a much less potent drug, and have a more difficult time withdrawing.  Dose amounts don’t play a huge role here, addiction is addiction and no matter the dose amount or type of drug, a baby has to go from dependency to living life without.

Every four hours Jena gets scored by the nurses.  The more signs of withdrawal, the higher the score, so the goal is to keep her scores low.

They are scheduling Nazis here in the NICU too, every four hours they do assessments and if there are no problems, the babies are supposed to sleep between the assessments.  (Something tells me Jena will be my most scheduled baby by far)

There are four things that Jena  is scoring high in consistently, that are all signs of withdrawal.
1.  Stiffness
2.  Poor Feeds
3.  Low grade Fever
4.  Mottled Skin

From day one Jena has been stiff.  If you pull her arm away from her chest, she pulls her whole head and chest into a sitting position.  I asked if there is therapy or massage or anything I could do to loosen her muscles, but the docs say it’s a problem from the inside out, there is nothing to be done.

Jena has a very poor suck, we give her a bottle every four hours and so far she has never drank an entire ounce.  What is normal is for her to drink (with lots of coaxing)about 10 mililiters (about 1/3 oz) in a half an hour, and the rest goes through her NG tube (tube from nose to stomach).

She consistently runs a low grade temp but her skin on her arms and legs looks blotchy like she is freezing. 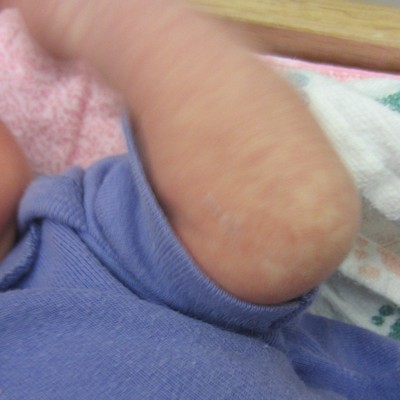 Not the best picture in the world (surprise surprise!) but you can see her mottled skin on her arm.

No she is not drug-free, on Day one the Doc administered phenobarbital (anti-convulsion and sedative) when they thought she may have started with light convulsions.  She will be on that drug for a while, and most likely it will be sent home with us to wean her off.  And of course that’s probably why she is sleeping so well. 🙂

Since she has gone now a full six days without any methadone, her body is craving the drug.  Yesterday for the first time I could tell she was wanting something in between her feeds and was not satisfied. The phenobarbital does not satisfy that craving at all, and an opiate withdrawal is treated with another opiate.  Enter morphine.  So far the doc has been flirting with Morphine, and telling me not to be surprised if I come in one morning to discover she ordered it through the night.

I would love, love, love (and pray pray pray) if we could pull through without having to give her that.  It would fill her need, and calm her so she could coordinate her sucking instinct, which would be a positive.  It is addictive, so it would be another strong drug to be weaned from before she can be released from the hospital.  Our doctor is a cute little Thai lady, and most mornings she asks me how I’m feeling about the baby.  Most mornings I remind her that I had one extremely fussy son who screamed for two hours every night, and we would not have dreamed of giving him morphine.  Then she reminds me that she won’t administer it unless she thinks it’s necessary. Then she smiles and says: “Lets see how she scores today, and we’ll decide from there”.

So those are the nitty-gritty details.  My mom is here right now doing all my work for me, (baking, cooking, cleaning, mowing, shopping, plus keeping the three older children a little stable) so I’m spending most of my day time at the hospital.  I leave the hospital in the evening usually around 7:00-7:30.  By then I’m ready to see the older kids, so its not hard for me to leave the baby overnight. The night duty nurses are awesome; but when I wake up in the morning, all I can think is that I have a baby laying all alone in her bassinett, and all I want to do is jump in the car and get to the hospital as fast as I can.

Gene has been home a lot more the past couple of weeks, he often spends the morning at home before he goes to work and then He’ll come to the hospital towards evening then too.  We are so blessed.  It has gone so much smoother than I dared to dream or hope.  Oh, and the NICU has us in our own private room with a cot, chairs, bathroom, and yes wifi(!).  And its evident that on the weekend they bend their rules and we are allowed to sneak our kids into the room to see their sister.

Thanks so much if you have breathed a prayer for us. We are being held up!  Love to you all.
Andrea

I'm a mom of four. I am a farmer's wife, and after ten years I am still adjusting to that. I like writing, acting silly with my kids, and having long conversations with my husband. I'm on a quest for a peaceful, simple life. I follow Jesus. View all posts by Andrea Esh

22 thoughts on “Details on Jena’s Withdrawal”